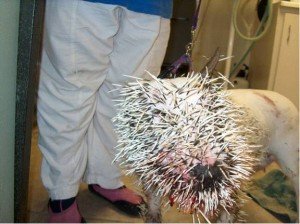 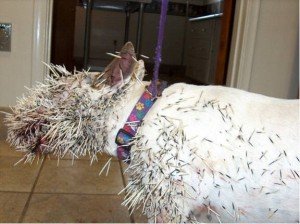 From urbanlegends.com – “Comments: Apart from the fact that the poor pooch pictured above is incorrectly identified in the caption as a pit bull (she’s actually a bull terrier), these pictures are authentic. They were originally posted by the dog’s owner on a community message board on May 25, 2005. The terrier’s name is Inca.

“Thousands of quills were embedded even in her tongue,” her owner explained. “The vets worked for quite some time to get quills out and even still could not get them all. The one’s that are left will work themselves out over time. Inca is home and on antibiotics and pain killers.”

In a follow-up post dated July 13, Inca’s owner reported that “she is just fine and has just the odd broken bit come out once in awhile. Other than that she is back to her old self.”

Moral of the story: Dogs and porcupines don’t mix.”