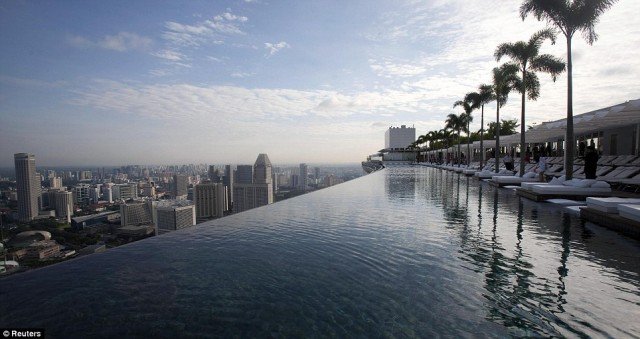 The $5.95 billion Marina Bay Sands Hotel, Singapore finally opened its doors to public in a gala event, and it also managed to dethrone the Emirates Palace Hotel, Abu Dhabi from its position as the world’s most expensive hotel. But that’s not all, the main attraction of the hotel is a 650ft wide pool perched up at the 55th storey of the magnificent hotel, making it the largest outdoor pool in the world that high. Called as the Infinity pool, the drop at the edge of the pool spills into a three-tiered catchment which pumps water right back to the main pool! The hotel also has a boat-shaped ‘SkyPark’ on top of the three towers.

The hotel features 2,560 rooms that would cost you $520 a night. Designed by Moshe Safdie, the structure is said to be based on the design resembling a deck of cards. The hotel décor includes an indoor canal that has Sampan boats to ride in, a casino, an outdoor plaza, a convention centre, a theatre, a crystal pavilion and a lotus flower shaped museum. The resort will open employment to over 10,000 locals, enough to generate $72m each year.