Picture of a scarry blue dress girl in my hotel room

Pelicans on a rock

Awesome coffee machine in the room

At least sitting in traffic was pretty!

I drove down to San Diego over the extended weekend which was really fun.  Went out to dinner at a place called Islands which we don’t have here in the Bay Area on Saturday night.  Played some poker with M&M’s, peanuts, and raisins for a while and went to my hotel which ended up being overbooked so they gave my room away.  They put me at a nice place across town free of charge which ended up working out but I paid for it with lack of sleep as I didn’t get into my room until 1am.  On Sunday I went to a church that has to have one of the best views possible because it is up on a hill and all of the windows overlook the ocean.  I liked the pastor a lot and got quite a few things out of the sermon.  Sunday afternoon I drove around and saw a lot of beaches, a lot of ocean, a lot of towns I don’t remember the names of, Seaworld (the outside of it) and seals.  Legoland isn’t too too far from Seaworld and it looks like Tyler would love going there when he gets older.  Sunday night I ate downtown and got some ice cream (can’t go wrong with that).  Laura, they had the USS Midway docked downtown and I think you can take tours on it which made me think of you and Skyler.  By the time I got downtown it was dark so the pictures I took won’t do it justice.  On Monday I-5 closed through the grapevine so I had to take 101-N the entire way home which turned a 7 hour drive into an all day and night event.  Made it home safe this morning and had a great time.

If I haven’t said it a million times before, I love California.  I was talking to my mom yesterday, who said it was snowing like crazy in Portland and that my flight later in the day may not make it.  I was surprised to hear things were so cold up north because my neighbor across the street was washing his truck in a short sleeve shirt. My flight was scheduled to leave Oakland at 4:40pm, but at around 1pm I learned via text message that the flight was canceled.  I tried to call Horizon Airlines after getting the text message to get another flight but upon calling they basically said, “hey it is snowing like crazy in the Pacific Northwest, and we are slammed with calls, so we can’t take any more so call back later…bye”.  After 20 minutes of trying to talk with someone, they finally let people sit on the phone lines, and my wait time was 19 minutes.  I got another flight which was scheduled to leave at 7pm, so I took the dogs to the kennel, finished packing some last-minute things, and headed to the airport.

If you haven’t traveled with a toddler by yourself yet, let me just say you haven’t lived.  I lugged two huge suitcases, a backpack, and Tyler, but don’t worry everyone I am a powerlifter, so it was nothing for such a brute of a man like me.  I got all checked in and after going through security I have decided the terrorists have won.  Seriously, I had to take my laptop and video camera out of my backpack, take my shoes and Tyler’s shoes off, my belt off, and then when I got through, they had to test the milk I brought for Tyler while I was getting us dressed again.

So, after getting through  security, I decided I deserved a Starbucks and let me tell you the coffee never tasted so good.  Since I got to the airport early, I went to the other end of the terminal which was completely vacant, so Tyler could run all over the place without bothering anyone.  You would have thought Tyler was Forrest Gump Jr. the way he was running around the airport.  About an hour into Tyler running around at the end of the terminal, I got text messaged by Alaska Airlines that the flight was delayed another hour.  We went over to the gate to hang out, which lasted about 5 minutes or less of sitting.  He played peekaboo with the woman behind us for a few minutes before deciding he wanted to run around again.  I talked him into going to Starbucks yet again and got another coffee.  When you are entertaining a toddler in an airport, a guy needs his coffee, and there really wasn’t more I could do to keep myself entertained.  After I got my second coffee (life is good) I showed him the horizontal escalators that connect the two terminals.  Since it was about 9pm at that point nobody was riding the escalators, so I took him on it which he loved.  I swear we took those escalators 5 times each way before we needed to get back over to the gate.

The escalators were great entertainment, and even I was having fun drinking coffee and chilling on the escalator watching the planes.  About the time we got back over to the gate, we were told the plane we were waiting for just left Portland, so we were going to be delayed another hour and twenty minutes.  That meant more walking around the airport with Tyler, so by the time the plane came in, and they called for families traveling with young children I marched right to the front of the line, let me tell you.  I talked with a couple with a young daughter from Portland until we were ready to board the plane.  How great would it be to be able to go to the front of every line any time you had your young child with you?  Seriously, when you are traveling with kids, it is like parting the Red Sea of people.  Let me tell you it is like you are traveling with a rock star getting into a club ahead of everyone else.

We boarded the plane, and the flight attendant was nice enough to move the person next to us, so Tyler could have a seat to himself.  I luckily had half a bottle of milk left for him so as we were taking off I gave him a bottle to help his ears, and before we hit 30,000 feet he was asleep and stayed asleep the entire way.  Horizon Airlines is great because they give out Jones Soda, Northwest microbrews and wine, and unlike every other airline out there they don’t charge you a dime for it.  So, anyone that knows me knows that I chose the microbrew which was Snow Cap ale from Pyramid Brewing that I loved. In fact, every time the flight attendants came down the aisle they would fill your glass, so not eating that night I was loving life after walking behind a toddler in an airport for 4 hours.

My dad had to chain up his truck to pick me up, but we made it into my parent’s house at 1am and Tyler was such a trooper.   Between Tyler and Alaska/Horizon Airlines, I can’t thank everyone enough for making the trip up to Portland as painless as possible considering the weather conditions.  We laid Tyler down in a crib at 1:30am, and he literally just passed out as soon as we put him in.  It is snowing like crazy still here today, so more videos and posts to come.  🙂 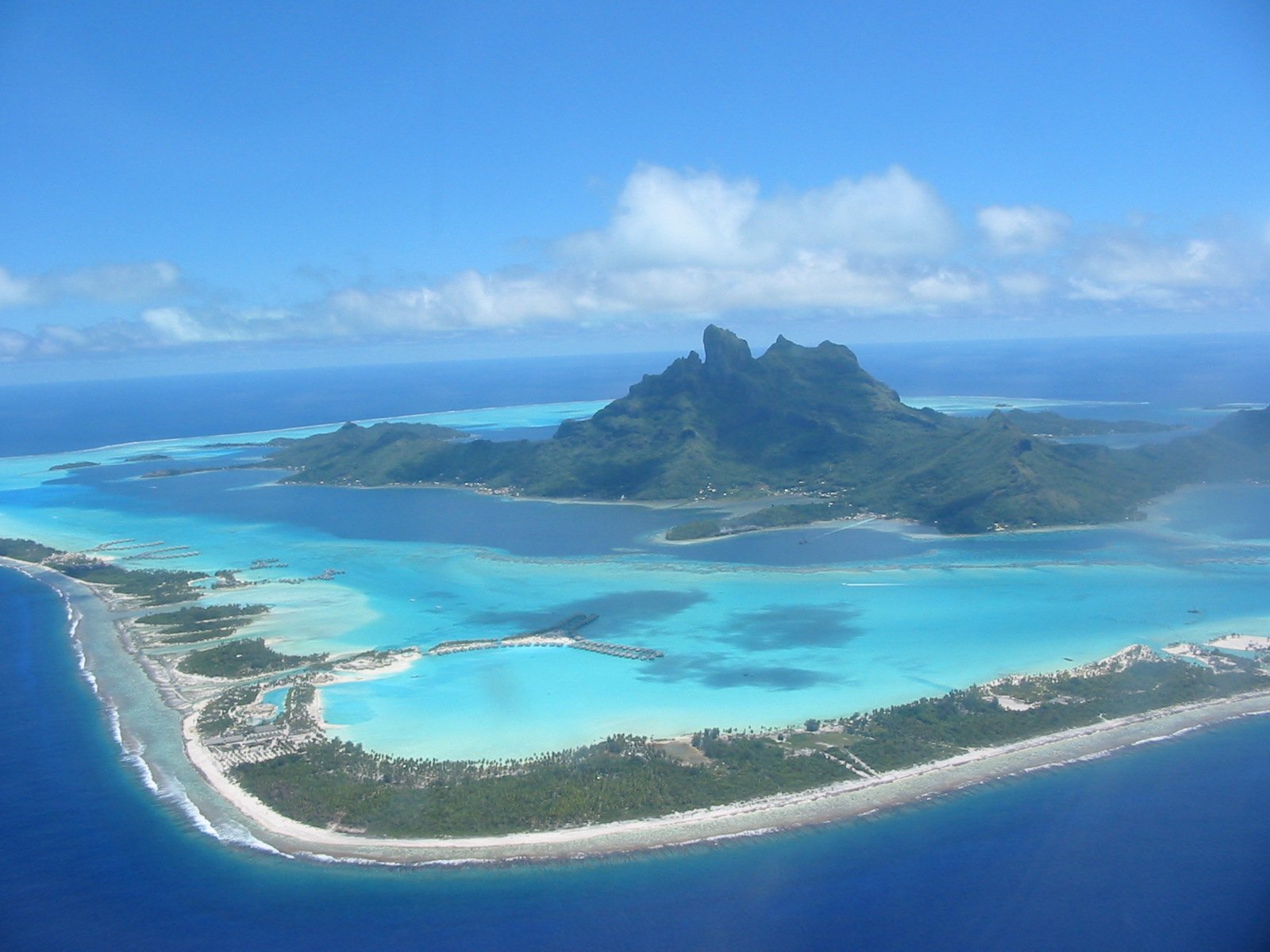 Man could I use a tropical vacation right about now.  Bora Bora anyone?

My mom, dad, nephew Evan, and I went to Bob’s Red Mill for breakfast this morning.  If you are ever in the Portland, OR area you should definitely visit and get some breakfast.  They opened a huge visitor’s center across the street from their mill which sells products they produce as well as serve breakfast and lunch.

If you don’t already know I am up in Portland, OR for Thanksgiving to visit my family this year.  I left the house at 5:05am yesterday and was expecting to hit rush hour traffic in Sacramento but I guess it being a holiday week the traffic was really light.  I drove past Weed, CA where I normally stop for lunch and gas because at 9am I wasn’t hungry and with a Honda Civic I get great gas mileage.  In fact I didn’t have to stop for gas until Grants Pass, OR which is a whopping 392 miles.  Another bonus was I only paid 1.89 a gallon for gas so the bill came to $21.00.  Although I didn’t go to Weed I took a picture of the sign for you.  🙂  Being that I am traveling alone this year I didn’t have anyone rational to tell me they want to stop.  I’m always someone wanting to test my limits and decided stopping wasn’t an option and after filling up with gas (and a bathroom break) in Grants Pass, OR I drove the rest of the way to Portland.  I got into Portland at 3pm and was amazed that I still had a half a tank of gas left.  When I normally drive up to Portland I take a Saturn Vue which requires you fill up at least twice.  So that means I was able to get up to Portland on pretzels, corn nuts, water, and a little more than $30 in gas.  Since technology hasn’t allowed me to blog and drive at the same time (safely at least) all I could do was listen to my iPod and take pictures.

Once I got there my mom and nephew Evan were there to greet me.  They have been having Evan practice “Uncle Jeremy” which turns out to be “Meeemeee Uh Uh” when he says it which is the most adorable thing in the world if you ask me.  Evan is super smart and as soon as my mom told him I was the infamous Meemee uh uh he instantly associated me with that name.  I would leave the room and he would say “Meeemee uh uh”?  Of course then returning he would say Meeemee uh uh!  We went to dinner at the Old Spaghetti Factory which is so awesome.  This morning we are going to Bob’s Red Mill for breakfast and I’ll blog about that later because it seriously can’t be beat for a breakfast place. 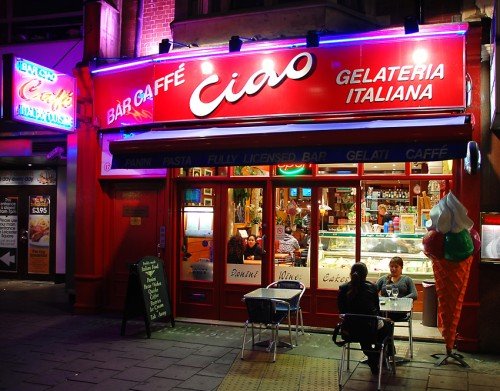 If I ever get the opportunity to visit London I definitely want to go to Ciao who has spaghetti and fried egg ice cream.

Lana, her mom and sister went to Pismo Beach on Wednesday, Thursday and Friday.  Below are some pictures from their trip.

Lana and I walked everywhere in San Francisco yesterday for our anniversary.

If you ever get the chance, hike Beacon Rock in Washington.  These pictures are probably 6-7 years old.