When my wife and I were first dating we went to Ecola State Park on the Oregon Coast.  In fact it was there that I tripped over a dang log and smashed my new digital camera on a boulder.  I was way too cool to have the camera around my neck and as my wife says “sometimes fashion hurts” which I tend to hear when she wears high heels.

No joke after finishing the hike were were going to watch the sunset over the ocean on a blanket when 5 deer came out of the woods.  So imagine the sun setting over the ocean with 5 deer right in front of us with no camera!  Sometimes I really think God has quite a sense of humor.  Any way my point of writing all of this is I found a video tonight of a girl who nearly falls down the cliff at the park which makes you want to jump through your computer monitor and try and grab her.  Seriously I bet you are going to go “ohhhhhhh” as soon as you see it.  No worries though she is OK but it will scare you good so if you have kids be careful when asking them to backup when taking a picture when they are at the edge of a cliff! Here is one of the last pictures the camera took before I killed it. 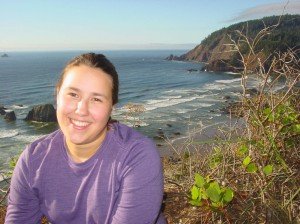