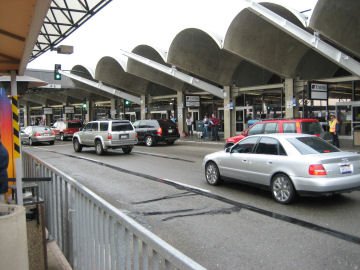 I am flying to Minneapolis, MN this morning out of Oakland Airport.  I arrived to the airport on time and learned my flight is delayed until 10:15am so I get some time to catch up on email, news, and blogging which is nice.  Oakland has free Wi-Fi so I’m just hanging out being an electrical outlet hog charging all of my devices before the flight.  I don’t think I get into Minneapolis until a little after 8pm now but that may end up working out better because I wouldn’t have liked driving in downtown traffic not being familiar with the area any how.  Got my Starbucks and am at the very end of the terminal so I can’t people watch (too much), but it has been an amusing morning. A lady with a young daughter was yelling at a ticketing agent because our flight was delayed, a mom yelled at her husband from across the terminal that he couldn’t control the kids while she sat and watched TV, and my favorite being a TSA Agent saying “make sure and check your pockets and take off your belts…you are going through a metal detector so it will detect metal…sigh” upon me forgetting to take off my belt before going through the detector.  I fortunately remembered to take the ChapStick out of my pocket and slip it into my luggage before checking it this morning.

Every time I fly I am reminded by how much society has changed and I think I can argue it isn’t for the better.  We have let our fears control us, society has become complacent to previously unacceptable social norms, and people just don’t seem as nice as they used to be.  Seriously if we had a time machine and could go back 20 years to tell people in the future you can’t get through airport security with ChapStick in your pocket people would laugh right?  If we said we don’t bat an eye at paying $7.54 (before tax) for an iced coffee and muffin do you think people 20 years ago would find that acceptable?  If we were to tell them that gas prices were upwards of $3.40 a gallon which made airlines charge for checking luggage but didn’t stop when the price of a gallon of gas fell back to $2.50 would people 20 years ago find that acceptable?  If the answer to those questions are no, then why are we as a society so complacent?  Oh and update on the lady who was yelling at her husband for not controlling the kids.  She has moved from the TV to her laptop while dad continues to watch them and he is settling an argument the kids are having with a game of rock, paper, scissors.

Speaking of approximately 20 years ago, in 1984 Twisted Sister sang “We’re Not Gonna Take It”.  More than 20 years later not only are we taking it we seem happy to take it.  In summary I would like to say long live the 80’s,  I hope society wakes up and stands up for what is right, and can we start being at least a little nicer while “taking it”?  🙂