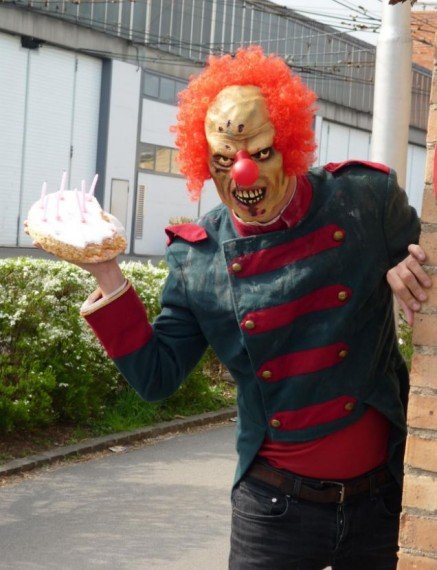 “Dominic Deville stalks young victims for a week, sending chilling texts, making prank phone calls and setting traps in letterboxes.  He posts notes warning children they are being watched, telling them they will be attacked.  But Deville is not an escaped lunatic or some demonic monster.  He is a birthday treat, hired by mum and dad, and the ‘attack’ involves being splatted in the face with a cake.  ‘The child feels more and more that it is being pursued,’ said Deville.  ‘The clown’s one and only aim is to smash a cake into the face of his victim, when they least expect it, during the course of seven days.’  If the boy or girl manages to avoid the ‘hit’, they are given the cake as a birthday present. Well, that’s alright then.

The frightening fun can be stopped at any time, which is handy for parents who have second thoughts and don’t fancy the cost of child therapy.  Deville said: ‘The clown will never break into a residence or show up at work. ‘It’s all in fun and if, at any point, the kids get scared or their parents are concerned, we stop right there.  ‘But most kids absolutely love being scared senseless.’  Deville set up his Evil Clown service in Lucerne, Switzerland, after being inspired by some of his favorite horror films – possibly including Stephen King’s It and Killer Klowns From Outer Space.  The idea is unlikely to be popular with sufferers of coulrophobia – the irrational (irrational?) fear of clowns.  But Stephen Vaughan, of Clowns International, said scary clowns could be as funny as their red-nosed counterparts. ‘I think what Dominic is doing is a great idea,’ he added.  ‘Bringing a little bit of life and laughter into kids’ lives is what we are all about.”