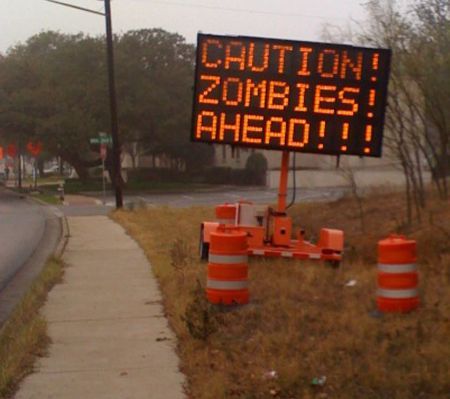 I attended a coaching workshop on Friday and I especially liked a portion of the workshop that talked about outcomes of various management styles. When we started white boarding we brainstormed the outcome of what happens when a manager tells, advises, and directs.

We came up with the following list for when managers direct/tells/advises:

We next discussed the outcome of what happens when management listens and came up with another list:

Now after reviewing the outcomes above, can you guess which response Jeremy came up with?  If you guessed zombies you’re a winner.  I really said it and I really mean it and the purpose of this post is to discuss what I mean about the “zombie effect” in the workplace.  Wikipedia defines a zombie as “a creature that appears in books and popular culture typically as a reanimated dead or a mindless human being”.  The scary thing is you are likely working with zombies and you may not even know it.  Zombies that become infected with the zombie virus don’t bite a victim who then suddenly becomes infected.  Instead, I’d argue that employees become zombies over the course of weeks, months, and even years.  When it comes to the zombie effect, ignore everything you’ve seen in comics or movies.

I’m an animal lover so know that no frogs were harmed in the making of the video (wait until the very end).  Even though no frogs are harmed it is still a bit disturbing but if you know anything about me you know I like to help illustrate my point via multimedia examples.  I’m a more of a visual learner and if you are too I think you will be equally fascinated by the video below of a frog in a pan of water.  If you don’t have the heart to watch the video, you’re a better person than I am (I watched it).  At the start of the video the frog sits calmly in a pan of room temperature water but the person performing the demonstration slowly turns up the gas burner beneath the pan.  Because the temperature is slowly increased, the frog doesn’t notice the temperature increasing.  Eventually the water starts to boil and the frog dies as a result.  Organizations who do not listen of course aren’t going to say they don’t listen their employees but if they continually ignore the danger around them, eventually bad things happen.

Frog In A Pot

Now that we’ve seen what can happen to zombie employees you of course want to avoid them which begs the question: “how can you tell if you work with zombies, or worse, decide if you’re a zombie employee yourself?”

If you want to spot zombies in your organization, look for these common signs:

When I said not listening to employees and always directing them produces zombie employees the response in the class was laughter.  Why do you think they laughed?  I’d argue they laughed because in today’s workplace we have become accustomed to calling things by their politically correct names.  When that doesn’t occur it catches people off guard.  Therefore, you likely haven’t heard of zombies in an organization, you may have heard terms like employees being unmotivated, disengaged, or even being under-performing. Corporations are big ships so change happens slowly.  Very few employees/managers/leaders in an organization stop to ask themselves: “hey, is it getting hot in here, or is it just me?”.   If organizations aren’t doing pulse checks an organization can start losing its focus and ultimately lose its employees and customers. 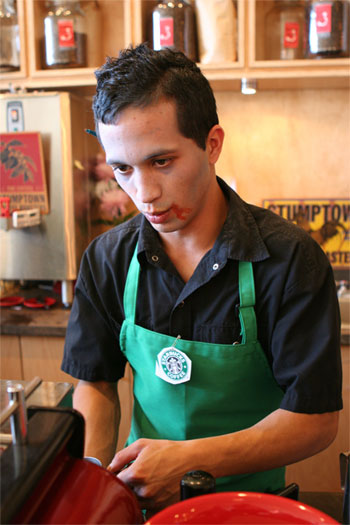 The zombie function is simple, the more you micromanage the employee, the less the employee will think for themselves.  The theory says “the more you use your reins, the less they’ll use their brains.”  If you’ve ever been micromanaged you know how it can feel to have someone constantly looking over your shoulder.  Leaders who don’t trust their employees tend to constantly focus on where their employees are as opposed to the output they are producing.

Inc. Magazine has an article by John Case titled “The Open-Book Revolution” where he defines open book management as “a way of running a company which gets everyone to focus on helping the business make money.”  Leaders often feel threatened when associates they manage think of better ideas than their own so they instead choose to make decisions in isolation.  In doing so, leaders who choose to not get input and feedback are creating zombies.  Additionally many leaders feel they know best so they don’t trust their employees to make decisions.  Furthermore they micromanage them to make sure everything is done exactly as they would want it done.  Don’t get me wrong, employees do need to be overseen and guided.  I merely argue that few employees are given proper responsibility and training for that responsibility.  They are also not set free and held accountable for what they were hired to do which is producing results (within an agreed upon timeframe).  When the idea or decision is eventually communicated without involvement of others in the organization, what typically tends to happen is associates learn to stop questioning, stop thinking, stop caring.  When they stop those behaviors they simply start doing as instructed.  They become a zombie.

You can cure a zombie in the workplace by doing the following things:

Whenever possible of course be honest, be a good communicator, keep information you receive confidential, and conduct team building exercises.  We know zombies can spread their disease to others and when it does we also know it can spread to customers so cure the problem within your organization before it is too late!

So now you know the warning signs, if you see one, or if you are one, get help or help yourself!  Do you have any thoughts on zombies in the workplace?