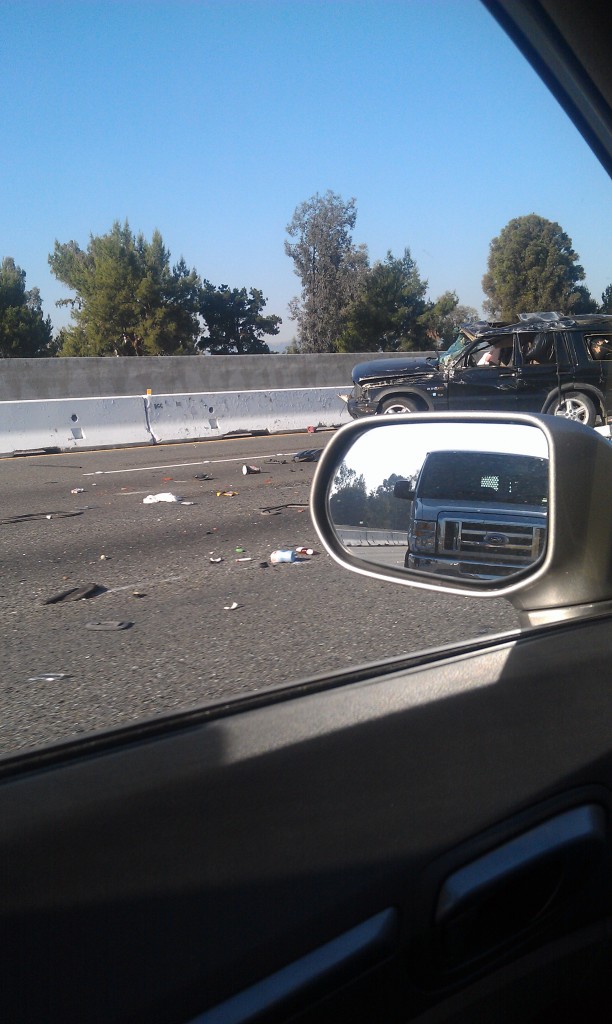 Today I was driving to work and was at the right place at the wrong time.  As soon as I merged onto 580 going westbound I saw a Range Rover make a very hard left to avoid the car in front of him which caused it to flip onto the roof of the car twice.  The most difficult thing to see was I saw the man driving the vehicle get ejected from the car and thrown high up into the air and onto the highway.  Something else I’ll never forget is as the car was flipping a bunch of dust and debris was in the air and all of a sudden that dust turned pink.  It was like I was watching a movie right before me, but I obviously knew it wasn’t.  Cars immediately stopped just before the location where the SUV came to a stop, and we all sat there for a moment not quite sure what to think or do.  It was like time stood still for a moment.  I drove my car onto the shoulder of the highway, so I could call 911.

Fortunately 911 picked up within 20 seconds of me dialing which was great.  I was in shock, I know I was because after getting off the phone I realized some of the information I gave to the operator wasn’t as accurate as it should have been.  While I was talking with 911 an African American man started climbing out of the SUV’s sunroof and was very likely in shock because as soon as he made it to the roof he literally rolled off the roof and collapsed onto the highway.  He got up maybe 30-45 seconds after falling to the highway and walked close to the front of my car and collapsed again at the side of the road and sat down.  Everything about the crash was disturbing, and I felt so helpless.  I had my son in the back of the car and people were trying to get by the accident, so I was also afraid of becoming an accident.  A nurse came to the scene and tended to the African American man and I talked with an officer to help give a report later in the morning.  If anyone has more details on the victims of the crash I’d love to know more.  I pray for their families and themselves and can’t express enough how much I feel for them.  The photos of the car is from a picture a coworker found on Waze and is not something I took.  It does however help show what I saw (to a degree).  Please drive safe, everyone, and please buckle up.