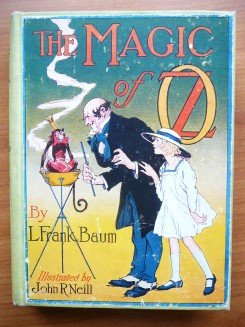 “If you go back back a few hundred years, what we take for granted today would seem like magic – being able to talk to people over long distances, to transmit images, flying, accessing vast amounts of data like an oracle. These are all things that would have been considered magic a few hundred years ago.” – Elon Musk

I learned an important lesson a few years ago from a designer working at Apple. He said the more constraints you have, the more magical your designs tend to become. This post is intended to take you through what I’ve learned thus far as a result of that encounter and hopefully allow you to see life’s limitations as a springboard of possibilities.

Growing up I loved the concept of magic and owned a few magic kits. I never really got to put my magic to work in front of a large audience until a traveling magic show came to perform at our elementary school. Each teacher was asked to pick a student from their class to be in the show. I was picked by the teacher and I have to admit I was a little apprehensive tending to be on the shy side. I did however love the idea of being able to practice a newly learned trick and finally having an audience, even if it was the entire school.

That morning I met with the magic company so they could teach me and the others chosen how to perform all of the tricks for the show later that afternoon. I was paired up with another boy to do an escape from a magical trunk. The trick was they would put the other boy in the trunk, lock it, and I would stand on top of the trunk to “ensure he couldn’t escape even if he managed to somehow get past the lock.” The magician would pull a hula hoop attached to a curtain up and around us so the audience couldn’t see us for a few moments and “magically” the boy in the trunk would appear on top of the trunk and I would disappear. Once the magician opened the trunk I would appear and the audience would be even more amazed. What the audience didn’t know was the trunk did lock as a volunteer from the audience proved, but on the inside was a small lever that allowed the person inside to unlock it. Luckily the trick went off without a hitch and my friends were amazed, or at least entertained.

I’m in my mid thirties now so it has been quite a few years since that show but even in my professional years I’m still quite intrigued by the concept of magic. Creative companies, and most companies who offer their customers an experience have used the word magic in their products. Disney is one of the most famous companies that likes to make its customers forget their problems and bring visitors back to their childhood as soon as they enter the gates. Disneyland has even branded itself “The Magic Kingdom” and it is hard to walk away from your experience at one of their parks or media properties without feeling the magic. Where things get interesting in the professional world is when you limit yourself  because time and time again I’ve found those constraints to be what drives some of the most creative things I’ve done.

Magical Web Design
When you give a web designer 1280+ pixels to design a website they won’t hesitate to fill the page with features and content because they have the space. If you give that same designer 640px (iPhone resolution etc) they tend to stop and reconsider every pixel because they are now space constrained. The less space you have to work with, the more difficult it is to meet the original requirement.  Those consuming your design will expect magical things to happen with each interaction because interacting with smaller device, say a phone, is often times more difficult for them. In the web space it is interesting because if I was to ask you to think of the last website you went to that you would describe as “magical” you might have a tough time, right? However if I was to ask you to tell me about a time when you interacted with your smart phone and it did something “magical” you would have no problem thinking of an entire list of examples.

The best example of this principle is when I first used Shazam on my smart phone. Being able to hold up my phone within the proximity of a song playing and have it tell me the artist and song title was magical. Another great example was I tried Uber for the first time a few weeks ago and I have to say that experience was also magical. If you are not familiar with Uber it allows you to get transportation, often within a few minutes, right from the tap of a button on your smart phone. Upon leaving the car you are automatically billed the agreed upon amount via PayPal or a Google Wallet account you setup beforehand. Whether you call them magical moments, or wow moments, I am really passionate these days about designing magical moments.

Magical Writing
I’ve always been someone who loves to create, but often find myself jumping from idea to idea rarely finishing most projects. I have found the projects with a deadline, or often, a sudden deadline are those I tend to finish. The reasons why projects with deadlines likely get finished as compared with the others is you will be held accountable for meeting that deadline, or in other words you now have a constraint. When writing try and give yourself a deadline to finish it, or give yourself rules like not being able to use the backspace key to free write.

Magical Video Moments
In the past when I’ve had to create videos it is usually designed to educate and entertain the audience. I can’t tell you how many times I’ve created something I thought was fantastic only to be told to “cut the length in half.” I’ve heard things like “people these days don’t have time to watch a two minute video” to “it has to be a minute or less.” What is interesting is although I initially liked the initial video, time after time the final video tends to be better because of the constraints I was given.

General Creativity
“We need to first be limited in order to become limitless.” – Phil Hansen

One of my favorite examples of someone who has been able to leverage a constraint in life to make something magical is Phil Hansen who “developed an unruly tremor in his hand that kept him from creating the pointillist drawings he loved. Hansen was devastated, floating without a sense of purpose. Until a neurologist made a simple suggestion: embrace this limitation … and transcend it.”

Your Magical Findings
Have you found life’s limitations have helped you create magical moments? Tell me about your experience.