Christina and I are vacationing in Hawaii this week.  We often joke that we would make the most hilarious contestants for the TV reality show The Amazing Race because we love to travel but traveling doesn’t seem to love us.  I think we’d make a great team though and if nothing else we’d offer some great comedic value to the audience watching us.  Christina is the smooth talking nice one with all the time in the world talking to ticket/reservation agents and I am the direct and straight to the point one who wants to quickly get the answers I need.  Then once I get the answers I need it is off to our next location until…PALM TREE (like SQUIRREL in Up)…and then I have all the time in the world to take pictures in the middle of the race and enjoy the experience…which is exactly the opposite of her…which is to get going and not see/enjoy everything around her.  It is comedy at its best and we have a good time with each other and even remarked at the end of the day how awesome it was we didn’t even fight…not once (but that is us).  We are patient with each other and we balance each other out quite nicely.  So with that setup, below is how our race officially begun for the week.

Upon printing the time share certificate the night before leaving I realized a mistake…a BIG mistake.  The certificate had us arriving at the timeshare on the 20th in Maui and it was the 13th we had been planning for.  We didn’t think it would be a big deal but we called the timeshare to let them know of the error.  Unfortunately their offices were closed and reopened at 7am the following morning.  Our plane was leaving at 9:30am so things were about to get interesting.  We stayed up until just passed midnight and called the timeshare office as soon as they opened (while we were driving to Christina’s parent’s house who were taking us to the airport).  The first person Christina talked to basically told us we were out of luck and they didn’t have any availability or transfer credits in Maui.  I told her to hang up and talk with someone else until we found someone more helpful.  The second person she talked to was more helpful but said they only had a timeshare on the Big Island but our plane tickets were for Maui.  Upon calling yet again we finally got consistent answers/options and decided we had better take the Big Island timeshare so we could at least have a vacation somewhere.

Upon arriving at the airport the Hawaiian Airlines representative greeted me without a hint of smile and upon me letting her know our travel plans had changed and we needed to rebook tickets she gave me the strangest scowl I think I’ve seen.  For some reason she wasn’t grasping what I was telling her so Christina and her spoke the same language and I think she even got a smile or two out of her.  She next reported to us that it would cost us $558 each to change our tickets.  I reminded her we already had tickets to Oahu and we were planning to transfer to Maui from there so I didn’t understand why the tickets were so high priced.  After helping her figure that part out she got the cost down to $169 and we were on our way. We were the last team to arrive to the gate in Oakland but luckily this was a non elimination leg of the race and we received a road block once we arrived at our destination.

Once on the plane we had a 5 hour plane ride ahead of us.  I got the MacBook out and organized some files, watched an hour long Gary Vaynerchuk video which I normally wouldn’t have time to do.  Life was good, except a little more leg and arm room would have been awesome.  I know I looked like a velociraptor trying to type on my laptop with the seat in front of me fully reclined.  Once we got to Oahu we arrived at the International Terminal which meant we had to quickly walk to the other side of the airport so we could hit our connecting flight to the Big Island.  We walked pretty fast and once we hit the open air portion of the airport I was in heaven.  I kept stopping to take some pictures.  I love being a tourist and doing all the touristy things.  I got about 15 seconds of time to stop and take these before Christina urged me to keep going.  I was happy I could photograph my…SQUIRREL!

On the flight from Oahu to the Big Island I snuck out my smart phone and got a great shot of Honolulu.  Christina and I ended up sitting apart because of the last minute tickets but I sat next to a helicopter pilot who now lives in the LA area.  He knew all the islands and used to do helicopter tours on the Big Island so he could point out all the interesting points of interest. 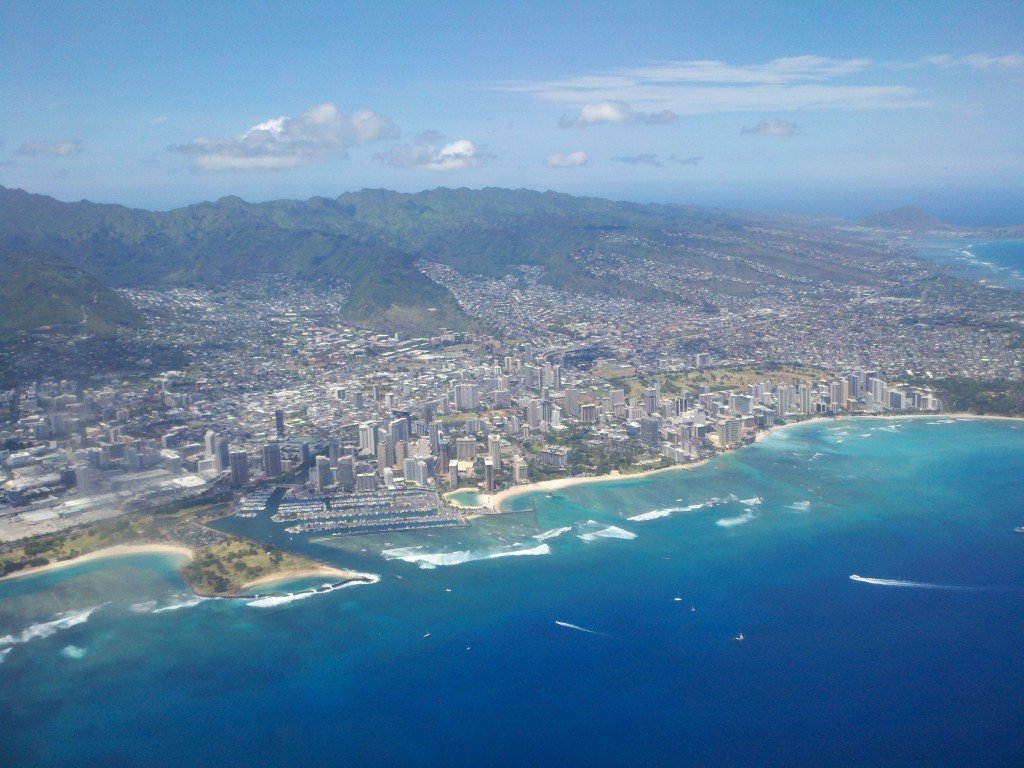 Upon arriving on the Big Island the helicopter pilot beside me pointed out the lava flows and all sorts of interesting things I wouldn’t have otherwise been aware of.

We got the car rental changed, the timeshare information somewhat sorted out, and we got some groceries for the week.  We don’t yet know how we are getting off the island and where we are staying Saturday night, but we’re here.  I think we may go over to Maui later in the week to connect back with our original return flight, but we’ll see how things go.  Aloha!  Yes, I’m that annoying tourist type. So despite our slow and comedic start, I am proud to say we’re still in the race!  ;)