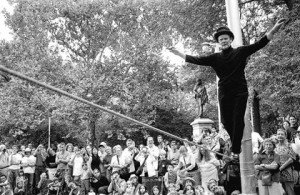 My dad emailed me this story so I Google’d his name hoping it was true but it doesn’t look like it is. Great story though, it can be applied to several things in life.

Several years ago the Great Gadzoni had just completed a challenging tightrope walk across Niagra Falls. The wind was howling and stinging rain pelted him as he inched across the rope. Met with enthusiastic applause on the other side the Great Gadzoni was wringing the water from his cape when an excited fan approached, urging him to make a return trip but this time pushing a wheelbarrow, which the fan just happened to have with him. The Great Gadzoni was hesitant, having barely made the first trip across in the high winds and pouring rain. But the spectator insisted stating that he knew the Great Gadzoni could do it. “You can do it. I know you can” the fan insisted. The Great Gadzoni thought for a moment. “You really believe I can do it?” “Yes, definitely” the fan responded. “OK said Gadzoni. Get in.”