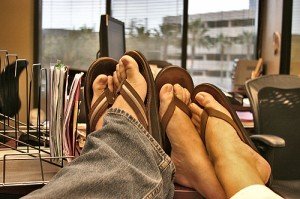 As I have mentioned in past posts, I was at a Communications Media Managers Association (CMMA) event last week in Arizona.  Before I was a manager I always hated not getting any information about what my bosses got to learn at the events they attended so I vowed when I became a manager I would communicate everything (as much as possible anyway) that I learned.

CMMA brought a speaker in to talk about the differences of the generations in the workforce which I thought was interesting being a person from the Generation “X” era.  She said her son wears flip flops to work and she gives him a hard time for doing so but he says “oh mom people don’t care what I wear to work”.  Each generation is bringing their own style and way of thinking to the workforce.  As older genreations retire newer generations are going to greatly change the way we manage people, think, and work.

As you can see from the graph below, times are changing and in 2013 Generation “X” and “Y” are going to make up the majority of the workforce.  The speaker started the talk saying that there are lots of stereotypes with each of the generations and most of the examples below are sterotypes.  The speaker had each table list out the traits each generation tends to have for 15 minutes and below is what all of the tables came up with.  Obviously when you look at the traits of your generation I am going to bet they do not completely represent you which is why she said we can’t stworkeereotype but you also need to look at the trends and find ways to manage each generation because they have different outlooks on the world.


She said many people in each of the generation groups tend to have things happen to them which affect their outlook on life.  The list below are stereotypes/traits and events that likely shaped how each generation perceived the world which in turn changed how they work(ed) in a professional environment.