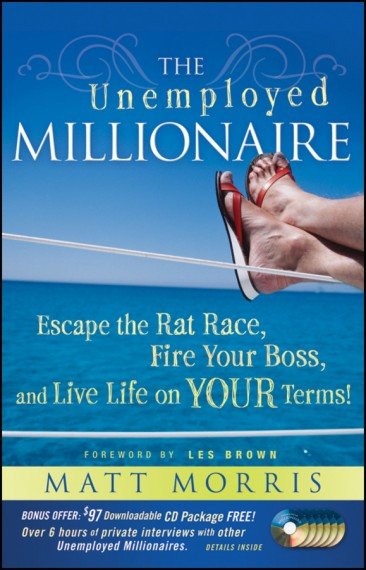 I purchased this book from Amazon.com last week and it sat on my coffee table until today.  I can’t remember the last time I’ve picked up a book and read it all within a day, but that is what I did with The Unemployed Millionaire by Matt Morris (I started it at a coffee shop this morning and finished it at home tonight).  I think I liked it just as much as The 4-Hour Work Week.  If you are like me and don’t have any plans to “escape the rat race, fire your boss, and live life on YOUR terms”, this book can still help us all.  I took notes today and have posted them below in case you won’t have time to read the book.  If you do read the book I’d love to hear your thoughts and I’d love to compare my notes with your own.  Since it is getting late I need to head to bed but wanted to share as soon as I could so forgive any spelling or grammar errors as I am copying/pasting straight from my word processor.