I’m a CMMA member and was recently asked to provide a written response to the question below. Because I share practically everything, below is my response.  Hope you enjoy it.

Does it still hold, or have technology changes and production efficiencies made it possible for communications media projects to be all three?  We’d like to hear your opinion. We’ll publish your contribution in an article in the next issue of e-visions. If you think the adage still holds, tell us why. If you think some projects can be good, fast and inexpensive, give us examples.

My Answer:
“Would you tell me, please, which way I out to go from here?  That depends a good deal on where you want to get to, said the Cat.  I don’t much care where…said Alice.  Then it doesn’t matter which way you go, said the Cat.”  – Lewis Carroll, Alice in Wonderland.

As long as I can remember I haven’t liked playing by other people’s rules so if I may, I would answer this question by only choosing one which is doing communication projects well (good).  I always strive for good, but I’m constantly striving for change and I don’t want myself, my department, or my company to ever be thought of anything less than good.  If you want to go fast and be cheap, you can be successful for a while, but ultimately the things you overlook in the process will catch up with you. 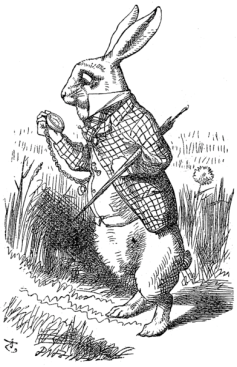 I have a young son at home, so a lot of my time is spent watching children’s movies.  I’m older now, and I am noticing that I’ve forgotten a lot of the lessons the movies of my youth taught me, but the good news is I don’t think I’m alone.  Having a child has taught me how to think like a kid again so when I saw whether we as communications media professionals can have good, fast, and cheap media projects I had to chime in.  Going back to kid’s movies, Alice in Wonderland can teach us a lot about making difficult choices.

In the first few minutes of the movie Alice sees a White Rabbit running past her.  The White Rabbit proclaims, “I’m late! I’m late! For a very important date! No time to say goodbye, hello! I’m late! I’m late! I’m late!” and disappears into a rabbit hole.  Alice decides to follow him down the rabbit hole which in turn makes her fall to a hall of locked doors of various sizes.  Alice can see through the lock of the small door a beautiful garden, but she is much too large to fit through it.  She therefore decides to drink a bottled with “DRINK ME” on it which makes her become so small she can no longer reach the key on the table.  She then eats a cake labeled “EAT ME” which causes her to grow so large she can barely fit inside the hall.

If you are like me, you have a lot on your plate, and you’re late, you’re late, you’re late!  We have different paths (doors) to try and get our work done, but we still seem to fit it all in.  We are constantly juggling doing good, fast, and cheap work, and it isn’t easy.  On top of that we are in a recession and budgets are being reduced so doing things cheaply is likely at the forefront of many of our minds.  However, with that being said, I believe it’s still possible to have good, fast, and cheap communications projects.

Times of recession and depression have traditionally been when society learns to do more with less.  If you like change you’ll love recessions because traditionally they have brought periods of increased innovation.  Because people are trying to do more with fewer communications professionals will start to reevaluate their service offerings within the companies they serve, as well as their processes.  Companies who don’t have strong offerings will be absorbed, replaced, or dissolved by more compelling and/or cost-effective solutions.  The other thing recessions bring is accountability.  People will need to start focusing on being productive rather than being busy.

Below are some tips I’ve found over the years for balancing good, fast, and cheap communications.

Good
Whenever possible, choose good over fast and cheap.  There is the old saying that “haste is waste” but old habits must die hard because only until recently have many communications professionals started to analyze the ROI of doing things quickly vs. effectively.  Always try to think about the long term implications before making a major decision.  Think about the last project you worked on hastily, how did that work for you?

Speed can sometimes win out over doing it well, but you usually can’t be successful if you don’t have lots of money to help you along the way.  If you had a lot of resources to access when you needed to go quickly, have you noticed how speed has affected your motivation?  In the famous tale The Tortoise and the Hare the tortoise boasts how fast he is but becomes so unmotivated to win he doesn’t take the race seriously.  The Hare who slowly and methodically trudges along ends up winning the race.  The turtle never lost the “eye of the tiger” and you shouldn’t either.  Don’t rest on your laurels because speed can only get you so far.

Cheap
Don’t be fooled by the old saying that “you get what you pay for.”  Today’s communication tools rival what cost then times as much just five years ago.  If your company isn’t looking at what the industry is doing outside the company please let me know your stock symbol because I’ll make sure not to invest in it.  Constantly look at trends and never think expensive always wins because in the end it isn’t how big your budget or communications tool is but rather what you are able to do with it and I truly believe that.

Fast
I know this is going to sound “cheesy” but have you ever listened to the lyrics of the song “Sunscreen”?  That song forever changed the way I look at the pace of life.

Some departments are ahead of others, some are behind…the race is long, and in the end, it is all about showing value to your organization.  Remember Alice hastily following the rabbit who only focused on time down the rabbit hole.  Rabbits are stressed about time, be the turtle and focus on finishing the race with purpose instead of simply crossing the finish line.

Summary
Which way should you go?  Good?  Fast? Cheap?  If you don’t know where you want to get to, it doesn’t matter.