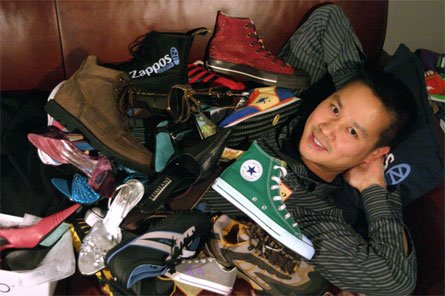 This is a great article on how the founder/CEO of Zappos.com learned how important it is for companies to focus on culture and choosing the right employees for their company.  If you have time, the very first question and answer is my favorite so be sure and read that one if you can.Tony Hsieh is the chief executive of Zappos.com, and this interview was conducted by Adam Bryant.  Below are some of my favorite questions:What are some of the most important leadership lessons you’ve learned?
After college, a roommate and I started a company called LinkExchange in 1996, and it grew to about 100 or so people, and then we ended up selling the company to Microsoft in 1998. From the outside, it looked like it was a great acquisition, $265 million, but most people don’t know the real reason why we ended up selling the company.  It was because the company culture just went completely downhill. When it was starting out, when it was just 5 or 10 of us, it was like your typical dot-com. We were all really excited, working around the clock, sleeping under our desks, had no idea what day of the week it was. But we didn’t know any better and didn’t pay attention to company culture.  By the time we got to 100 people, even though we hired people with the right skill sets and experiences, I just dreaded getting out of bed in the morning and was hitting that snooze button over and over again.

Why?
I just didn’t look forward to going to the office. The passion and excitement were no longer there. That’s kind of a weird feeling for me because this was a company I co-founded, and if I was feeling that way, how must the other employees feel? That’s actually why we ended up selling the company.  Financially, it meant I didn’t have to work again if I didn’t want to. So that was the lens through which I was looking at things. It’s basically asking the question, what would you want to do if you won the lottery? For me, I didn’t want to be part of a company where I dreaded going into the office.  So when I joined Zappos about a year later, I wanted to make sure that I didn’t make the same mistake that I had made at LinkExchange, in terms of the company culture going downhill. So for us, at Zappos, we really view culture as our No. 1 priority. We decided that if we get the culture right, most of the stuff, like building a brand around delivering the very best customer service, will just take care of itself.

So how do you do that?
About five years ago, we formalized the definition of our culture into 10 core values. We wanted to come up with committable core values, meaning that we would actually be willing to hire and fire people based on those values, regardless of their individual job performance. Given that criteria, it’s actually pretty tough to come up with core values.

Tell me what happened.
We spent a year doing that. I basically sent an e-mail out to the entire company, asking them what our values should be, and got a whole bunch of different responses. The initial list was actually 37 long, and then we ended up condensing and combining them and went back and forth and came up with our list of 10.  Today, we actually do two separate sets of interviews. The hiring manager and his or her team will interview for the standard fit within the team, relevant experience, technical ability and so on. But then our H.R. department does a separate set of interviews purely for culture fit. They actually have questions for each and every one of the core values.

Can you give me an example of the value and the question?
Well, some of them are behavioral questions. One of our values is, “Create fun and a little weirdness.” So one of our interview questions is, literally, on a scale of 1 to 10, how weird are you? If you’re a 1, you’re probably a little bit too strait-laced for us. If you’re a 10, you might be too psychotic for us.  It’s not so much the number; it’s more seeing how candidates react to a question. Because our whole belief is that everyone is a little weird somehow, so it’s really more just a fun way of saying that we really recognize and celebrate each person’s individuality, and we want their true personalities to shine in the workplace environment, whether it’s with co-workers or when talking with customers.  I think of myself less as a leader, and more of being almost an architect of an environment that enables employees to come up with their own ideas, and where employees can grow the culture and evolve it over time, so it’s not me having a vision of “This is our culture.”  Maybe an analogy is, if you think of the employees and culture as plants growing, I’m not trying to be the biggest plant for them to aspire to. I’m more trying to architect the greenhouse where they can all flourish and grow.

Did the process of developing those core values go smoothly?
Honestly, there was a lot of resistance to the core values rolling out, including from me. I was very hesitant, because it just felt like one of those big-company things to do. But within a couple of months, it just made such a huge difference. It gave everyone a common language, and just created a lot more alignment in terms of how everyone in the company was thinking. If I could do it all over again, I would roll out our core values from Day 1.

What other things did you do at Zappos to sort of reinforce and build the culture?
Probably the most important thing I did was try to encourage employees to come up with their own ideas for building the culture. The actual ideas that I’ve personally come up with are few and far between.

But what were those?
For example, for our offices in Las Vegas, it’s a big building. We’ve probably got 700 employees in Vegas. The previous tenants had multiple doors where you can exit, and the parking lot is in the back. We made the decision to actually lock all the doors so everyone has to go through the front-entrance reception area, even though that means you might have to walk all the way around the building. The reason for that is to create this kind of central hub that everyone has to pass through to help build community and culture.  And the free lunch we provide for employees is really meant less as a benefit in terms of a free lunch, and more to get employees to interact with each other. But most of the stuff that happens in our office is really about some employee coming up with an idea and, whether it’s me or other managers, saying, “If you’re passionate about it, just run with it.”  At some point, it kind of just snowballs, because once employees see other employees just doing stuff, then that lets them feel like they have more permission to run with their ideas.

If you’re hiring a senior executive, reporting directly to you, what kind of questions would you be asking them?
It’s pretty hard to interview senior executives, because they’re in that position for a reason. They do many interviews themselves. It’s hard to tell from an interview. So I’m not sure there’s that much you can get out of the in-office interview. They need the relevant skill set and experience and so on. But far more important is, are they going to be good for the culture? Is this someone we would choose to have dinner or drinks with, even if they weren’t working for Zappos?  Hiring senior-level talent is very hard, it’s hit or miss, and they can do a lot of damage to the culture. We’ve had bad experiences with that. So we have this thing called the pipeline, which is our vision for how we want to grow as a company. We’re hoping five years from now the vast, vast majority of all hires will actually be entry-level, but we’ll provide all the training and mentorship so that, over a five- to seven-year period, they can become a senior leader within the company. That will help protect our culture and also give all the employees a growth path professionally.

If you could ask only one or two questions to get a sense of a person, what would they be?
“If you had to name something, what would you say is the biggest misperception that people have of you?” Then the follow-up question I usually ask is, “What’s the difference between misperception and perception?” After all, perception is perception.

What are you trying to discover with those questions?
I think it’s a combination of how self-aware people are and how honest they are. I think if someone is self-aware, then they can always continue to grow. If they’re not self-aware, I think it’s harder for them to evolve or adapt beyond who they already are.